There are about 5,100 Tatars in China, most of whom live in Yining, Tacheng and Urumqi in the Xinjiang Uygur Autonomous Region.

Their history in China dates from the Tang Dynasty (618-907), when the Tatar tribe was ruled by the nomadic Turkic Khanate in northern China. As this state fell into decline, the Tatars grew in strength, and their name was used to refer to several tribes in the north after the Tang Dynasty. Their homeland was later annexed by Mongols, and when the Mongols pushed west, many Central Asians and Europeans called them Tatars.

In the mid-13th century, Batu, the grandson of Genghis Khan, established the Golden Horde Khanate in Central Asia. It began to decline in the 15th century, and the Kashan Khanate began to rise on the middle reaches of the Volga River and in areas along the Kama River. The rulers of the Kashan Khanate, to boast their strength, began calling themselves Tatars, the sons of the Mongols.

Tatar gradually became the recognised name for the inhabitants of Kashan Khanate. Today's Tatar ethnic group was formed through a mixture of the Baojiaer people, Kipchacks and Mongolians over a long period.
After the 19th century, the serfdom crisis in Tsarist Russia worsened, and serf owners intensified their plundering of land. Most of the Tatars' land along the Volga and Kama was grabbed, and the inhabitants forced to flee. Some went south to Central Asia and then on to southern Xinjiang.

The Tatar language belongs to the Turkic language family of the Altaic language system. Because the Tatars mix freely in Xinjiang with the Uygurs and the Kazaks, the three languages have had strong effects on one another, and have produced various local dialects. The Tatars' written language is based on Arabic letters.

In the late 19th and early 20th centuries, some wealthy Tatar merchants netted great profits and forced smaller traders to the brink of bankruptcy. Of the few Tatars engaged in animal husbandry, most were poor herdsmen who had few animals and no pastures.

As a result of exploitation by Tatar and Kazak feudal masters, some poor Tatar herdsmen were forced to become hired hands, whose families suffered great hardship, and others were taken on by feudal masters as "adopted sons," who had to work as hired herdsmen but without pay.

In addition, there were also a smaller minority of Tatars engaged in handicrafts, chiefly in leather-making, tailoring and embroidery.

These trades were carried out as household sidelines.
Since 1949, the Tatar people have enjoyed equal political rights in Xinjiang, where many ethnic groups live in tightly-knit communities. They have representatives on the National People's Congress and various tiers of regional and local government. A series of social reforms has extricated the poor Tatar farmers from feudal exploitation and oppression. Some have now become industrial workers.

The Tatars' educational development began in the late 19th century when Tatar clerics opened schools in several areas. Besides the Koran, Islamic history and Islamic law, these schools taught arithmetic and Chinese language. The Ining Tatar School, set up in 1942, was one of the earliest modern schools for ethnic minorities in Xinjiang.
It played an active role in reforming the old religious education and teaching science and culture.
Many Tatar intellectuals earlier this century worked hard to set up and run schools. Some went deep into rural areas, and played a big part in establishing Xinjiang's educational cause. Their efforts benefited not only the Tatars, but also the Uygur, Huis, Kazaks, Xibes and Ozbeks.

Most Tatars in cities live in flat-roofed mud houses equipped with flues for heating. They like to hang tapestry inside their homes, which are usually very clean and tidy. Courtyards planted with flowers and trees have the appearance of small gardens. The Tatars in pastoral areas have adapted to a nomadic life, and live in tents.
Tatar cuisine, popular in Xinjiang, includes various kinds of pastries. At festivals, they serve pastries called "Gubaidiai" and "Yitebailixi," the former being cured with cheese, dried apricots and rice, and the latter with pumpkin, meat and rice. Both kinds have crisp crusts and soft contents. Tatar drinks include beer-like "keerxima," made of fermented honey, and "Kesaile" wine brewed from wild grapes.

Most of Tatars in cities belong to small monogamous families. Sons and daughters live apart from their parents after they get married, but they still support their parents until they die, showing great respect for their elders. Intermarriages between Tatars and other ethnic groups believing in Islam are quite common. Marriages between cousins occur but are uncommon.
A wedding is held at the bride's home in accordance with religious rules. The newlyweds must drink sugar water from the same cup, symbolizing a long sweet life together. Usually, the groom must live for some time at his parents-in-law's home, and in some families, must not go to his own home until the first child is born.

Babies receive a formal religious blessing three days after birth, and their names are usually taken from the Islamic classics. A child usually takes the surname of father or grandfather. The cradle rites are held seven weeks later, with the cradle and clothes provided by a grandmother.

Forty days after the child's birth, he or she is bathed in water fetched from 40 places, a custom intended to bring about healthy growth. When a person dies, the body is shrouded with white cloth in conformity with Islamic practice.
The cultural life of the Tatars is rich and colorful. Their music has a lively rhythm, and several musical instruments are used, including the "Kunie" (a wooden flute), the "Kebisi" (a kind of harmonica) and a two-stringed violin. Tatar dances are lively and cheerful. Men use many leg movements, such as squatting, kicking and leaping.

Women move their waists and arms more. Their dance styles incorporate features of the Uygur, Russian and Ozbek dances, but also have their own unique characteristics.
At festivals, the Tatars often hold mass dancing contests. "The Plough Head Festival" every spring is an annual grand gathering, held usually at beautiful scenic spots, and includes such collective games as singing, dancing, wrestling, horse racing and tug-of-war.

The game they enjoy most is the "jumping walk" contest. All contestants hold an egg on a spoon in their mouths. The first to reach the finishing line without dropping the egg is the winner. Tatar drama began developing earlier than those of most other ethnic groups in Xinjiang. By the early 1930s, a Tatar drama troupe had been set up and began giving performances in Ining, Tacheng and Urumqi. 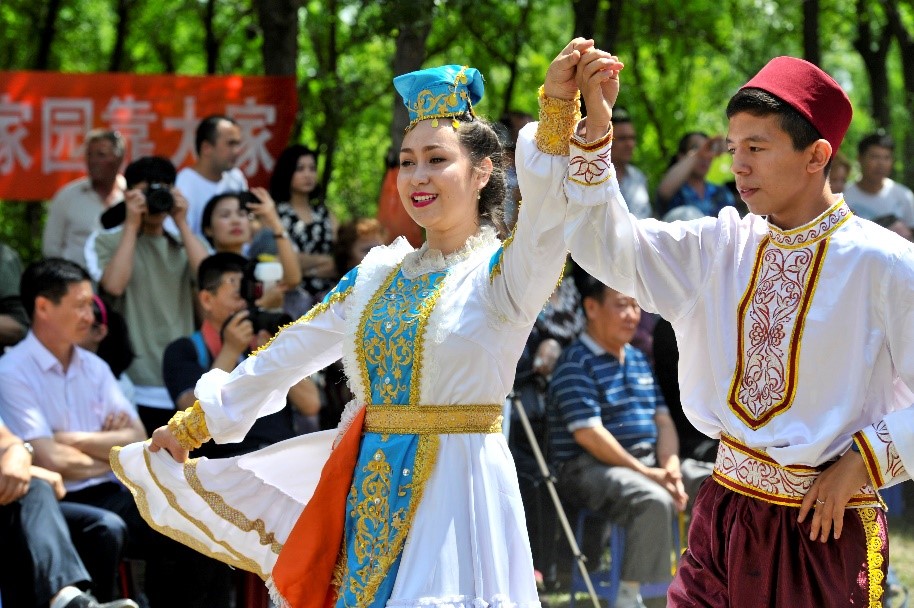