Jinan South Mosque
Address: Lipaisi Street, Shizhong District, Jinan
The Jinan Great Southern Mosque is the oldest mosque in the city of Jinan, Shandong Province, China. It was established during the Yuan dynasty (in 1295). Most of the present structures were erected during the Ming dynasty (in 1436 and 1492).

The basic layout of the mosque is that of a Chinese temple into which the elements needed for its function as a mosque have been integrated. According to legend, the Great Southern Mosque was founded during the Tang dynasty, but there are no known records to confirm this. The written record dates the establishment of the mosque at its present site to the year 1295, during the first year of the reign of Temür Khan (Emperor Chengzong of Yuan).

The mosque was damaged severely during the Cultural Revolution with many of the historical artifacts it housed being destroyed and the building converted into a factory. Since 1992, it has been protected as a provincial-level key cultural heritage site.

The basic layout of the mosque follows the courtyard style of a traditional Chinese temple with major buildings arranged along a main axis of symmetry. However, whereas in a Chinese temple, this main axis is typically oriented in the north-south direction, the main axis of the Great Southern Mosque is oriented in the east-west direction so that upon entering the main prayer hall one faces west (towards Mecca). In keeping with Chinese tradition, the main entrance of the mosque is protected by a spirit wall. 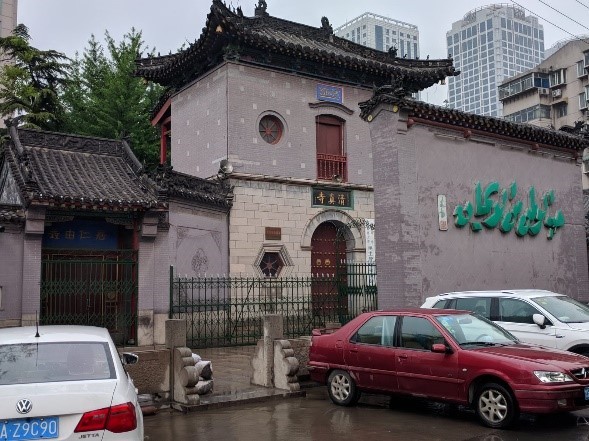