Lhasa Great Mosque
Address: Hebalin, Lhasa, Tibet
Lhasa Great Mosque was originally built in 1716. It underwent renovation in 1959 to what the building looks today. The mosque has a three-entrance courtyard which covers a total area of 2,600 m2. 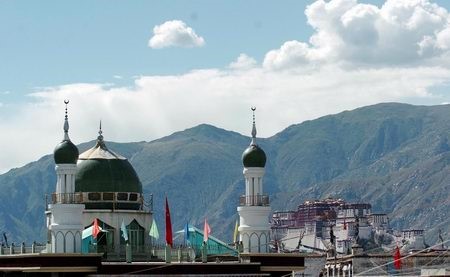 Id Kah Mosque
Id Kah is the largest mosque in China. Every Friday, it houses nearly 10,000 worshippers and may accommodate up to 20,000. The mosque was built by Saqsiz Mirza in ca. 1442 (although it incorporated older structures dating back to 996) and covers 16,800 square meters. On 9 August 1933, Chinese Muslim General Ma Zhancang killed and beheaded the Uyghur leader Timur Beg, displaying his head on a spike at Id Kah mosque. In March 1934, it was reported that the Uyghur emir Abdullah Bughra was also beheaded, the head being displayed at Id Kah mosque.[6][7] In April 1934, the Chinese Muslim general Ma Zhongying gave a speech at Id Kah Mosque in Kashgar, telling the Uyghurs to be loyal to the Republic of China Kuomintang government of Nanjing. 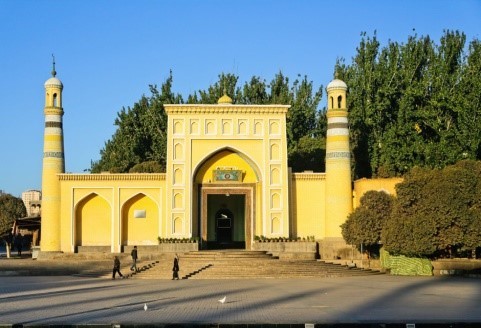