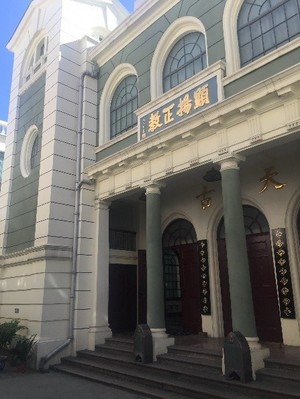 After the founding of the People's Republic of China on 1 October 1949, Shanghai Mayor Chen Yi inspected the mosque and approved appropriate funds for its maintenance. On 15 February 1994, the mosque was listed as heritage architecture by the Shanghai Municipal Government.

The mosque was built in the traditional West Asian Islamic style combined with Chinese architecture. The exterior is painted green and white. Above its entrance gate contains the word 'mosque' in Chinese drawn by calligrapher Luo Junti. The main two-story prayer hall can accommodate up to 500 people with a floor area of 500 m2. It is completed with arched windows. The mosque also has one minaret and four domes at the four corners of the mosque.

The mosque is surrounded by a rectangular courtyard. On the east side of the courtyard is a three-story Chinese style-building which houses lecture room, offices, library, reading room, sermon room and ablution facilities. On the south side of the courtyard is the Imam's room, reception room and bathroom. Next to the main mosque building is the Xiaotaoyuan Mosque for women located at 24 Xiaotaoyuan Street.

The building was built in 1920 and renovated in 1994. In 1920-1940, the mosque received and served Muslim people from regions around China who planned to go for Hajj to Saudi Arabia. The mosque is home to the Shanghai Islamic Association which was established in 1962 and also the Management Committee of Mosques in Shanghai. The women's mosque hosts religious activities for Muslim women in Shanghai. Many Chinese and foreign Muslims have gather at the mosque to take part in prayers. Many high ranking government officials and prestigious people from Islamic countries also have visited the mosque and taken part in prayers. 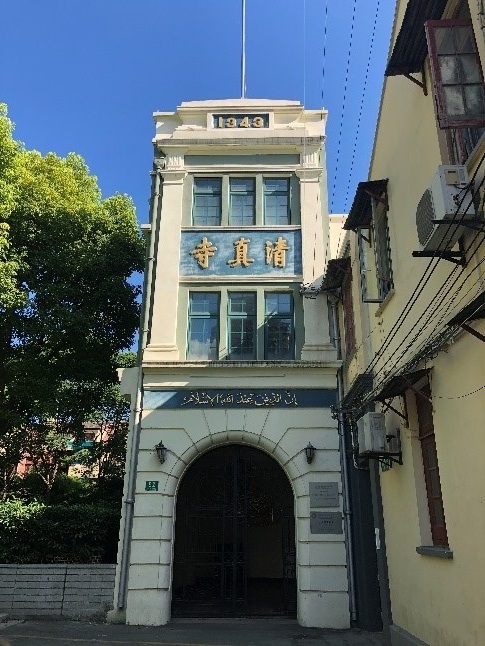 Shanghai Female Mosque
Address: No. 24, Xiaotaoyuan Street, Huangpu District, Shanghai
The Shanghai Female Mosque is located next to Xiaotaoyuan Mosque, it was built in the year of 1933 and closed during the second world war because Japanese invasion and occupation of Shanghai. The current mosque is in Arabic Style three story building, and covers an area of 600 square meter, also the nearest renovation was on 2010 because of the World Expo in Shanghai. 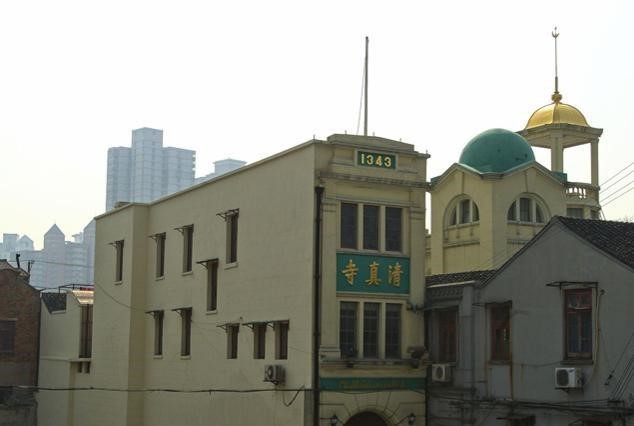 Shanghai Huxi Mosque
Address: No,3, Changde Road, Putuo District, Shanghai
Huxi Mosque was originally constructed at Xikang Road in 1914-1921 and completed in 1922 under the name Yaoshuinong Mosque. In 1935, the mosque underwent renovation and was expanded to be able to accommodate 200 worshipers. The mosque resumed its religious activities in 1979. 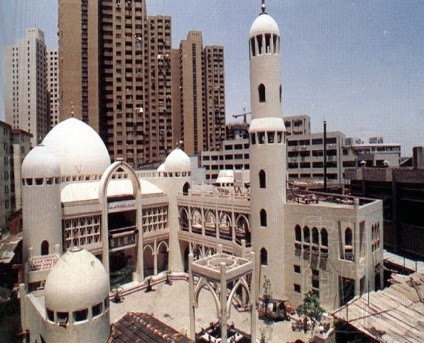 Shanghai Pudong Mosque
Address: No. 375, Yuanshen Road, Pudong New District, Shanghai
Pudong mosque was originally constructed in 1935 at No. 16 Wujiating, Pudong Avenue. It underwent expansion in 1984 due to its small size. In 1995, the mosque was rebuilt at its present location with the support and funding from Pudong District government. The mosque covers an area of 1,650 m2 which includes a courtyard, prayer hall, imam room, ablution room and office. The building has light-colored exterior with green dome. The main building consists of three floors built with Arabic style of architecture. It has a 40-meter high minaret and three smaller domes. The mosque also features shop selling books, religious materials and food. 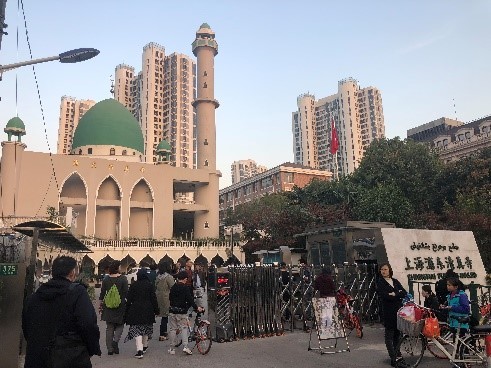 Shanghai Songjiang Mosque
Address: No. 21 Gangbeng Xiang, Songjiang District, Shanghai
The Songjiang Mosque, formerly called the Real Religion Mosque. It is the oldest mosque in Shanghai. The mosque was originally constructed during the Toghon Temür reign of Yuan Dynasty. It was rebuilt in 1391 and expanded three times during the Ming Dynasty. The mosque then went through four renovations during the Qing Dynasty. On 26 August 1908, the Shanghai municipal government listed the mosque as a cultural heritage.

The mosque underwent renovation again in 1985. The mosque covers an area of 4,900 m2. It was constructed in traditional Hui Muslim Chinese palace architecture with Arabic calligraphy. The mosque consists of the mail hall, prayer niche, corridor, two sermon halls and a bathroom. In the east of the mosque lies the Bunker Gate Tower for Muslims to do prayer. The prayer hall is located in the opposite of the tower in the west of the mosque. It is divided into the front and the back hall, with characteristics of Ming and Yuan architecture respectively. 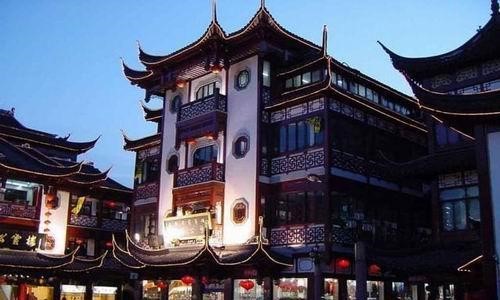