Urumqi Tartar Mosque
Address: South Jiefang Road, Urumqi
The Tatar Mosque is considered one of the oldest mosques in Urumqi. It was built in 1897 on funds raised by the local Tatar diaspora. Then it became a religious complex with a total area of 3,000 square meters. This is one of the largest mosques in the city, which can accommodate over a thousand people.

The Tatar Mosque was built in traditional style. All the walls, doors and windows of the mosque are decorated with various carvings and traditional ornaments in the form of plants and geometric shapes. The central tower of the mosque is covered with gold, which is typical for Tatar religious monuments. In addition to the mosque the complex territory includes rooms for Quran study, the private rooms of the Imam, as well as the reception hall and utility rooms.

Today, the major part of the Urumqi population goes to the Tatar Mosque, they are not only the Uyghurs, but also other representatives of the national minorities who live in the city: the Kazakhs, Uzbeks, Tatars, Dungans. The Tatar Mosque is an important Islamic center, playing a significant role in the lives of local people.
Urumqi Shaanxi Mosque
Address: Jianzhong Road, North, Urumqi
Shaanxi Mosque is the largest mosque in Urumqi and also the location of Islamic Association of Urumqi. The mosque was built in Qing Dynasty(1644-1911). The mosque is a traditional Chinese style building and the prayer hall is 10 meters high. In front of the hall is a spacious courtyard. There are rooms around the yard except the west side. The north hall is the classroom. The south hall is the wudu area. The east hall is the Imam’s office.
Urumqi South Mosque
Address: Erdaoqiao, South Jifang Road, Urumqi , Xinjiang
The Urumqi South Mosque was built in 1919 and rebuilt for three times, it is in downtown Urumqi, and was listed as a historic cultural building in 1985 by Urumqi municipal government. The current mosque covers an area of 464 square meters. The prayer hall combined by outer and inner parts. The inner hall can hold 300 people to do prayer and the outer hall can hold 500 people.
Urumqi Salar Mosque
Address: South Heping Road, Urumqi , Xinjiang
The Salar Mosque is one of the oldest mosques in Urumqi. This two story structure is located on Salasi Alley, and is in an area where many of the well known mosques are located. It was constructed in 1865, and has a rounded shape which faces the road. The green dome and single minaret are the other prominent features. The windows of the mosque are in the shape of a house with a triangular roof. In between each of the large windows is a small circular window.

The minaret is in four sections, with the bottom in similar design to the mosque windows, with circular openings above. The second section is the most attractive, as there is a "wavy" design made of blue and white tiles. The upper section has white tiles and is topped by a gold crescent shape, which is expected to be seen on most mosques. The Salar community is one of the many diverse ethnic groups which make up the Urumqi region. They are of Turkic origin, and have a history in China which can be traced back to the Tang Dynasty. They are mainly found in the Xunhua Salar Autonomous County and Salar Autonomous County of Gansu. Another ethnic minority are the Tartars who have a mosque on nearby Jeifang South Road. 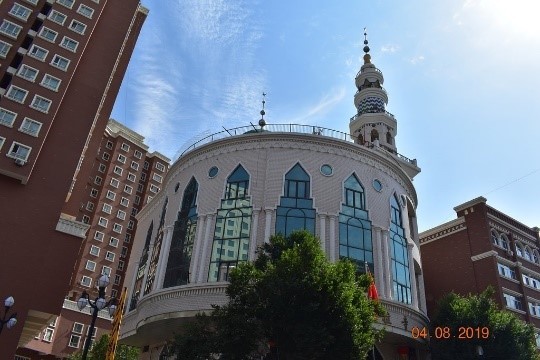 Guyuan Great Mosque
Address: 60 Guyuan 1 Alley, Heping Road South, Tianshan District, Urumqi, Xinjiang
This mosque is located near the south gate of Urumqi. Originally the old Beiliang Mosque, which was built in 1865, the mosque became a center of worship for many immigrants from Guyuan, Ningxia Hui Autonomous Region, from whence it took its current name. The building was relocated in 1952 and renovated in 1998.

The four angular minarets are a mixture of Islamic design and the hexagonal pavilions of the central Chinese plains in ancient times. The building as a whole has a distinctively Islamic look, but the ablution and office sections have green-tiled, upturned eaves adorned with mythical animal figures in the traditional Han ethnic style.
Back To List
Start To Plan Your Holidays Today!
You can now customize your halal tour with your friends and family.
Plan perfectly and create beautiful memories now with Halal Tours.
Contact Us Now