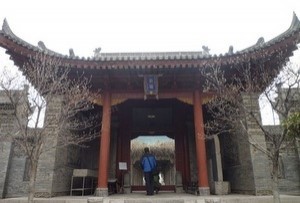 Dapiyuan Mosque
Address: Dapiyuan, Lianhu District, Xian
Dapiyuan Mosque was built in 1411, Qing Dynasty(1644-1911). The current mosque covers an area of about 3,333 square meters with a constructed area of 1,610 square meters. The prayer hall occupies an area of 354 square meters. It is a traditional Chinese style architecture. The mosque is quiet and clean, many old trees could be seen everywhere in the mosque. This mosque serves hundreds of local Muslim households nearby. 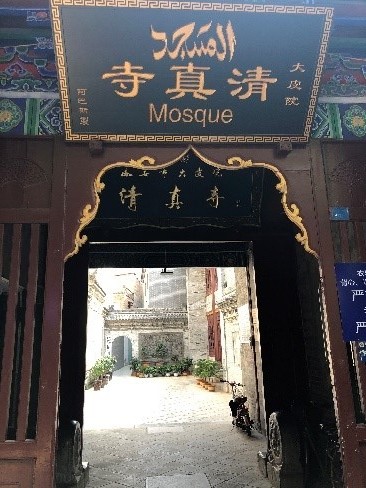 Daxuexi Alley Mosque
Address: Daxuexixiang, Lianhu District, Xian
The Daxuexi Alley mosque is located in Xi’an City in an area inhabited mainly by Chinese Muslim, in the street of West Daxuexi Alley, near the Xi’an Huajue Alley Mosque, the great Mosque, sometimes it is referred to as the Western Xi’an Mosque. In 1956, it was recognized as a Chinese historical heritage. The names of this mosque have varied since its construction. During the Tang and the Some Dynasties, it was known as Tangming Mosque. It became known during the Yuan dynasty as Huihui Wanshan Mosque. The mosque acquired its current name during the reign of Emperor Hong Wu of the Ming dynasty.

The mosque has a long history since its construction during the Tang Dynasty. It was one of six mosques identified on the map of Shaanxi Sheng Cheng Map, which was created and published in 1893 during the era of Emperor Guangxu. Although the map does not include the names of the mosques, by comparison to Google maps reveals that the Daxuexi Alley Mosque is located to the west of the Huajue Alley Mosque.
Xi’an Great Mosque
Address: No.30, Huajuexiang, Lianhu District, Xian
The Great Mosque of Xi'an is the largest mosque in China. An active place of worship within Xi'an Muslim Quarter, this courtyard complex is also a popular tourist site. The majority of the mosque was built during the early Ming dynasty. It now houses more than twenty buildings in its five courtyards, and covers 12,000 square metres (130,000 square feet). The mosque is also known as the Huajue Mosque, for its location on 30 Huajue Lane. It is sometimes called the Great Eastern Mosque, as well, because it sits east of another of Xi’an's oldest mosques, Daxuexi Alley Mosque .

The mosque was constructed during the Hongwu reign of the Ming dynasty, with further additions during the Qing dynasty. Previous religious complexes (Tanmingsi and Huihui Wanshansi) are known to have stood on the same site, dating to as early as the Tang dynasty. Islam was introduced to China during the Ming Dynasty in the seventeenth century, but went into full effect during the Qing Dynasty in 1644. When trying to integrate the different groups of people, people would gravitate more towards Chinese tradition due to feelings of superiority. During the 1700s, Muslim freedom of worship was limited, the ritual slaughtering of animals were forbidden, new mosques and the pilgrimage to Mecca was prohibited in the year 1731.

The mosque is still used as a place of worship by Chinese Muslims, primarily Hui people. Just the main hall of the Great Mosque of Xi’an can accommodate 1,000 people yet today a typical service only attracts around 100. The mosque is a walled complex of five courtyards, with the prayer hall located in the fourth courtyard. Each courtyard contains a central monument, such as a gate, and is lined with greenery as well as subsidiary buildings.

The first courtyard, for instance, contains a Qing dynasty monumental gate, while the fourth courtyard houses the Phoenix Pavilion, a hexagonal gazebo. Many walls throughout the complex are filled with inscriptions of birds, plants, objects, and text, both in Chinese and Arabic. Stone steles record repairs to the mosque and feature calligraphic works. In the second courtyard, two steles feature scripts of the calligrapher Mi Fu of the Song dynasty and Dong Qichang, a calligrapher of the Ming dynasty.

The Xingxin Tower is located in the third courtyard, which contains many steles form ancient times. This courtyard is for visitors to attend prayer services. The fourth courtyard has a bigger prayer hall which can seat more than a thousand people.

Overall, the mosque's architecture combines a traditional Chinese architectural form with Islamic functionality. For example, whereas traditional Chinese buildings align along a north–south axis in accordance with feng shui, the mosque is directed west towards Mecca, while still conforming to the axes of the imperial city. Furthermore, calligraphy in both Chinese and Arabic writing appears throughout the complex, sometimes exhibiting a fusion of styles called Sini, referring to Arabic text written in Chinese-influenced script. Some scholars also speculate that the three-story, octagonal pagoda in the third courtyard, called the Shengxinlou or “Examining the Heart Tower,” originally served as the mosque's minaret, used for the call to prayer.

The prayer hall is a monumentally sized timber building with a turquoise hip roof, painted dougong (wooden brackets), a six-pillared portico, and five doors. It is raised upon a large stone platform lined with balustrades. The expansive prayer hall consists of three conjoined buildings, set one behind the other. Interior ornamentation is centered on the rear qibla wall, which has wooden carvings of floral and calligraphic designs. 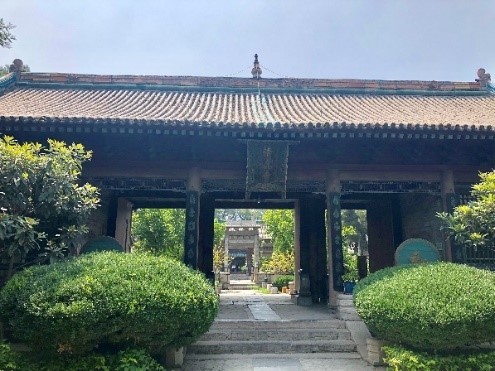