Ningbo Yuehu Mosque
Address: No. 18, Houying Lane, Ningbo
The Yuehu Mosque is a mosque in Haishu District, Ningbo City, Zhejiang Province, China. Islam was introduced to China in 651 AD. Hagras in which he recorded "the Muslims traders lived in Ningbo during the Song dynasty.... the mosque was built in 1003 during the era of Song Emperor Xiánpíng (998‐1003) by Muslims traders, and the mosque follows the norms of Chinese wooden structures".

Hamada Hagras in which he reported on the Yuehu Mosque "Muslims traders lived in Ningbo during the Song dynasty, particularly since the year 990 AD during the era of Emperor Chun Hua. Ningbo's commercial importance gradually increased, it flowed into large communities of Muslims Traders; Hence there was an urgent need to build places of worship for them. The Yuehu mosque built in 1003 during the sixth year of the era of northern Song Emperor Xiánpíng (998‐1003) by Muslims traders who had migrated from Arab lands to settle in China. The Ningbo Yuehu mosque is like Chinese mosques that follows essentially the norms of Chinese planning and layout design and wooden structures. The layout of mosques in China defied traditional Chinese planning. However mosques were influenced by another inescapable factor: the orientation of Mecca; all Chinese mosques had to face west, which imposed by Islamic faith; so the direction of Ningbo mosque is East‐west".

Hagras also recorded about the Mosque "It seems that the architecture of Beijing mosques had an impact on Ningbo Mosque; the layout of prayer hall was similar to other of Beijing mosques, such as Madian mosque, Haidian mosque, and Shucun mosque. On the other hand, the layout of the mosque was different from most Chinese mosques; where the entrance isn't located on the middle axes of the mosque plan. The mosque plan contains a multiplicity of courtyards; this layout had been followed in many mosques in China. The roof of the mosque was not affected by those found in the mosques of the Islamic world but followed the models of traditional Chinese ceilings. However architecture of the mosque is considered in its entirety Chinese architecture; where it was relying on items and elements of traditional Chinese architecture, such as wooden structures, courtyards, and the gates of the moon, as well as the Chinese plan, the Chinese and ceilings, but it affected by the Arabic inscriptions that refer to the Islamic religion and belief." 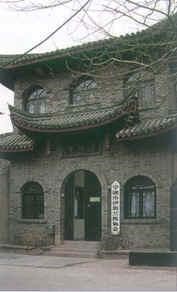